OK here goes! My biggest challenge to date. If I want to get into Triathlons next year then I need to learn to swim. Its been more than 15 years since I actively swam and I never really attempted to learn freestyle (preferred breast stroke). But the time has come for me to learn freestyle and I fully acknowledge that its going to be my biggest challenge to date in my currently active fitness ambition, but I'm got my heart and mind set on it and I know I can achieve it.

At the time of writing this post I can only do 1 lap (25m) comfortably and non-stop and am aware that to do half ironmans i need to do 80 laps comfortably in a 25m pool :)

I currently find the breathing very hard to master as its completely different to my other sports. But this only means that I'm going to have to work harder in my swimming and i know once I master my breathing then it's just stamina and strength so I'm looking forward to that stage.

My current best swimming times are:
(Again I'm going to maintain a complete history so I can see how the far I've come :)

I know I'm going to look back at this one day and be very amused and proud. I will end this post with one of my favorite sayings ever which I feel in suitable in describing my ambition in achieving this goal.

Faith is taking the first step even when you don't see the whole staircase.
Martin Luther King, Jr.

Around 2 weeks ago I thought I'd mix up my fitness and endurance training and take up cycling, i also want to get into Triathlons next year so it was the logical way to go. I bought my first road bike, a Cell Team Shimano 105 and have started putting in cycling training sessions 1 to 2 times a week.

It an expensive sport to get into as you need to purchase and maintain all the gear, but it is very rewarding and hopefully i can take part in a few events before attempting any Triathlons in 2009.
Posted by Mark Paul at 10:27 PM 1 comment: 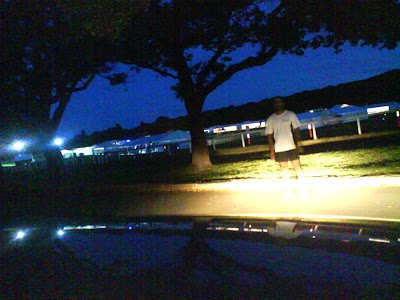 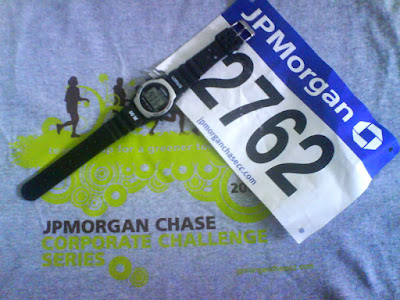 I’m looking forward to starting my ironman 70.6 triathlon training regime now, more on that soon :)
Posted by Mark Paul at 7:06 PM No comments:

I've only had 2 weeks to train for this run and I wish I had more time. Its very different from the longer 'endurance based' training sessions I put in for the 21km Half Marathon as for this run I had to try and build speed into my sessions.

My goal is to set a new personal best for a 10km and maybe get a nice tan :P

This was a tough one, was really hot and I wasn’t feeling 100%. I ran it with my mate so that helped keep pace thankfully. In the end I managed to wipe 7 mins off my personal best for a 10km run and ended up with a time of 52 Mins and 48 Secs. which was great, but I did feel it soon after. Here are my photos and finishing video.

I think I’ve been officially bitten by the ‘Running Bug’ and want to take part in many more running events. I really like the long distance runs and hope to be able to do a 42km Marathon in 2009, but in the meantime as there are not many long distance events here in Sydney I’m going to do a few shorter runs and try to improve my running times.

My current best running times are:

For those of you who are wondering how I plan my routes, I use Windows Live Maps and the very useful Collections tool to plan my route. Its benefits over other online mapping tools like Google maps is that you are able to plot your route ‘off-road’ as well (for example through parks, alleys etc) and it gives you a very accurate distance measurement. Other mapping tools do not let you plot ‘off-road’ routes, so even though I do prefer the usability of Google Maps in this case Windows Live Maps is the best tool for me.

Around 2 months ago, as part of my Muay Thai training plan I set to do a lot more running to lose weight and condition my lower body and legs. I started off at 4km and set out to try and aim to get that top around 10km.

After hitting 10km I have set my self new goals; to push to new limits and keep improving my running distance.

As part of this challenge I registered myself for the Blackmores Half Marathon which is a 21km iconic run here is Sydney. I’ve been training for the last 2 weeks and hope with dedication I’ll be able to run this and complete it.

* and i've chosen to run on behalf of Vision Australia so if you would like to contribute to that cause please donate here
http://www.gofundraise.com.au/MarkPaul

* For anyone else who wants to attempt this are not Pro runners, the coolrunning forum is great, check it out here

Wow, what a run that was.. after all the preparation I pulled it off. Took me a total of 2 Hours and 14 Mins but it was the best run ever. The route was amazing and the weather was great. Cant wait for next years event. Here are my photos and finishing video.